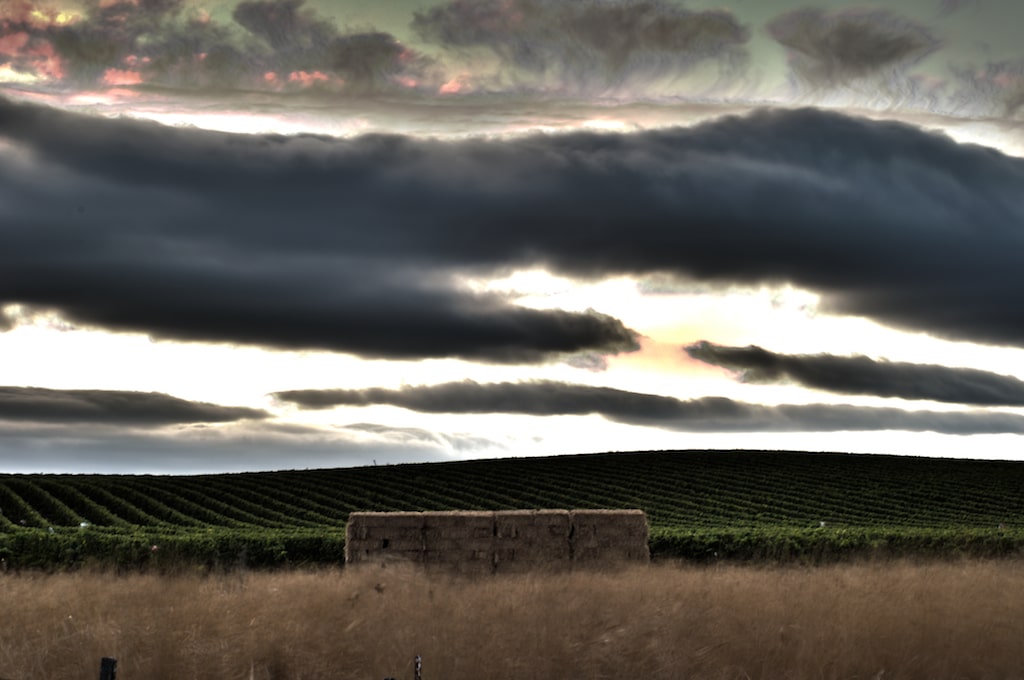 I have posted a couple of HDR (high dynamic range) photographs on here before, and have talked about what it is and why it is used, so I won’t bore you with all of that stuff again, but I did want to share this HDR image with you.

And the reason for sharing it (besides the fact that I think it’s a cool shot) is because this was my first attempt at using HDR techniques to set a mood and to bring that “other worldly” look to an image that HDR is known (and criticized) for.

This particular shot was made at the same time I made the other sunset and vineyard shot that I posted back on September 26th. Check it out here for comparison. As you can see, the skies and clouds look VERY different. In the first shot I posted I used HDR techniques in an attempt to capture the image exactly as I saw it. And, honestly, without using HDR, that shot would not have been possible and I would not have been able to show you what I saw.

But this second shot, seemed to be begging for that surrealistic aspect of HDR that I normally eschew. And that is my own aesthetic. I feel my role as a photographer professionally, shooting for my winery clients, is to give them what they want. And each client has their own idea of what they want their bottles of wine or vineyards to look like, and I try to match that idea. But the approach is always “photorealistic.” And in my own personal photography, I try my best to bring back images that capture what I saw (and felt) at the moment I pressed the shutter release—a very daunting task, actually, and one in which I am not always successful.

But after snapping the first sunset, I turned to leave and saw this composition; I just knew this might be one to have a little more fun with. I have to admit, it is a little fun and exciting because you never quite know how it will turn out until you load up the exposures (this one was made from 8 different exposures) and start tweaking the settings. I have a feeling I might be doing more of these in the future!