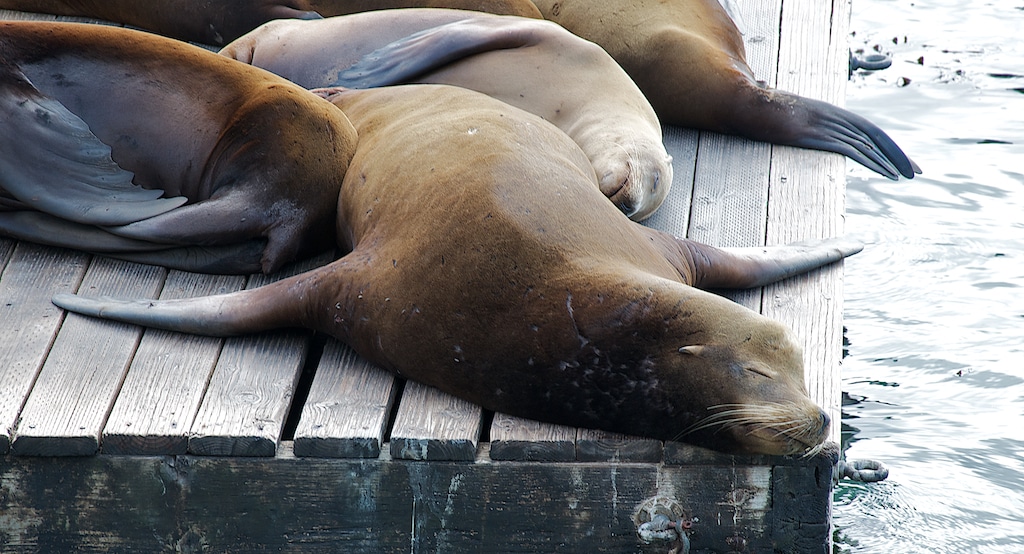 My sister was visiting from El Centro, CA a few weeks ago and in between reminding her that it was 75 degrees here in Napa and 115 degrees in El Centro, we played tourist for the weekend. That means for us, living in Napa, that we are going to Oxbow, at least one winery, and San Francisco. San Francisco meant an overlook of the Golden Gate Bridge and, for a first time visitor–my sister–a walk down Pier 39.

Now, Pier 39 is, it must be confessed, not a place that most locals go. It is, by definition, a tourist trap, complete with over-priced stores, inexplicable jugglers, and hordes of people. In short, probably not the coolest place to hang out or be seen at. But apparently someone forgot to tell these seals.

I am not going to go into why they are there, as that discussion is better left to the Discovery Channel or a 10 second Google search, which would most likely lead you here. No, please search away, as it is pretty cool. And the help make Pier 39 cool as well. That, and the ice cream joints. And the food. And the view of Alcatraz. OK, fine, it WAS fun to go there, if only once every 6-7 years.

Of course, I was not going to NOT attempt a picture…a picture that has been taken millions of times a year. But since my normal work as a bottle photographer is in a studio with wine bottles (at least they don’t smell like dead fish and seal poop), I had to try. With this sort of shot, you really can’t expect anything super original, but you can hope for something fun, or cute, or hopefully, as in this case, both.